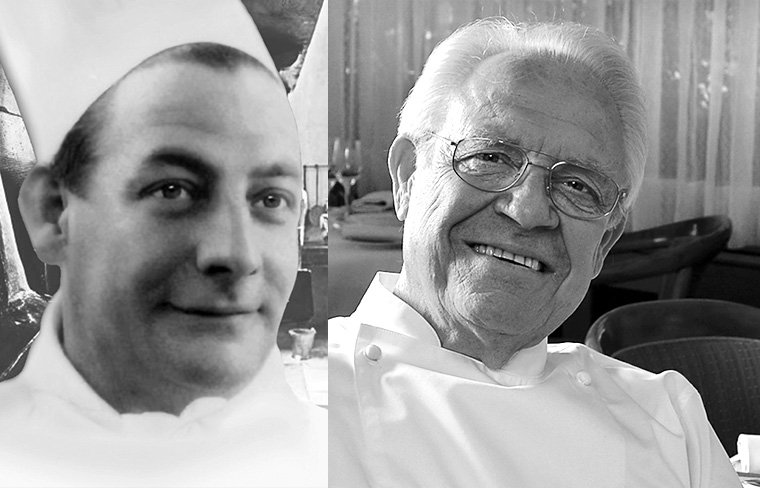 The year was 1955 when Benjamin Girardet decided to open up a local restaurant on the outskirts of Lausanne. He settled in the former Hôtel de Ville de Crissier and ran his restaurant for over ten years before his death in 1965.

His son, Frédy, took over the management and, more importantly, the kitchen. The young chef, a trained typographer, explains that he had his culinary revelation during a meal at the Troisgros brothers in Roanne. « A shock, an epiphany. Suddenly, everything became clear. I understood the real meaning of the trade : creating delicacies, almost like a magician. »

Inspired by the nouvelle cuisine, he challenged the traditional ethics without forgetting its foundations and created his own style. Refined, precise and spontaneous, he had a golden rule : never more than three flavours on the plate. Benoît Violier has said of him that « Mr. Girardet was a chord genius. Incredibly rigorous, but also capable of the most brilliant improvisation. » This philosophy has forever left its mark on the succeeding chefs.

Frédy Girardet took up the challenge to have his restaurant be a part of the elite circle of the top haute cuisine restaurants in the world : Les Grandes Tables du Monde. Over the years, his hard work and perseverance was rewarded:

The legend of Crissier was born. Aile de volaille with leek and truffle coulis, canard in Brouilly wine, cassolette of truffle cardoons, Frédy Girardet was designated « Chef of the century » in 1990 by the Gault-Millau guide. He went on to create marvellous dishes his peers described as masterpieces of haute cuisine, still on offer today on the restaurant’s menu.

In 1996, after 31 years as head chef of the restaurant, he retired and handed over management to his right hand, Mr. Philippe Rochat.

Philippe Rocha began his career as a cook in 1972. The 6 years he spent living in Zurich, at the Savoy Baur en Ville and the Baur du Lac greatly influenced his career.

On the 1st of July 1980, he joined Frédy Girardet. He worked his way through the entire kitchen hierarchy until he was nominated Head Chef in 1989.

In 1995 he married marathon runner Franziska Rochat-Moser and together they ran the restaurant until 2002.

Although he had a different personality and a different style, Philippe Rochat stayed faithful to the values of his mentor and stuck to the Three Flavours rule, trying to reach “invisible perfection”, as said in his own words.

He lightened the butter-and-cream based cuisine, excelled in seasoning and worked tirelessly to acquire full and permanent balance all the while generously flavouring his dishes. Large langoustines in fine curry tempura, sole filet and lime carrot, Benoît Violier and Franck Giovannini nicknamed him Incredible Palate.

The Restaurant de l’Hôtel de Ville de Crissier shined, even more so when Philippe Rochat was awarded the title “Cook of the Year” by Gault & Millau Switzerland in 1999. That same year, the Yellow Guide wrote: Crissier is still home to the best restaurant in the world. In 2006, he was knighted by the National Order of the French Republic.

In April 2012, after 16 years as head of the restaurant, he stepped down to let Benoît Violier take the reins. 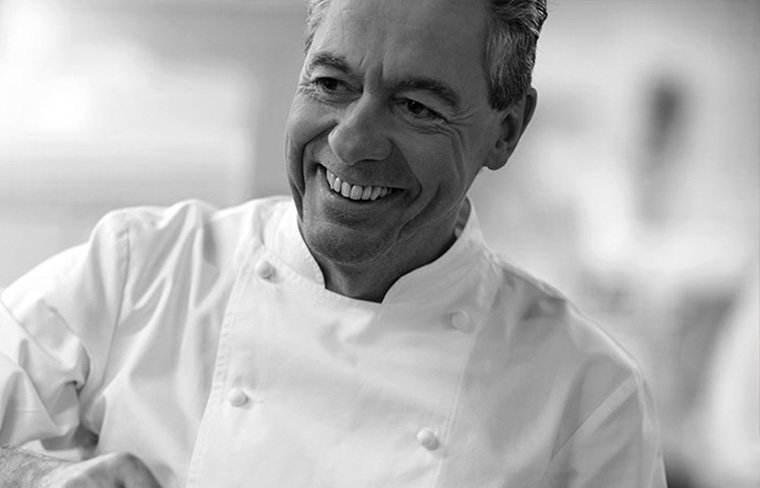 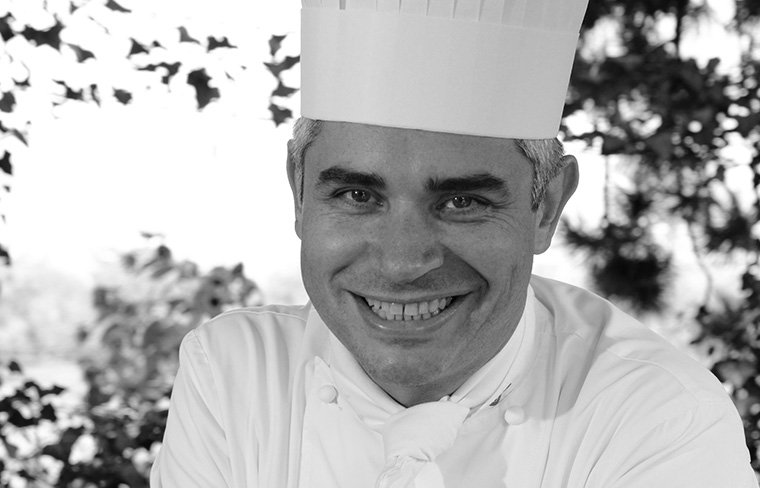 Benoît Violier and Philippe Rochat worked together for years to ensure a smooth transfer for the Maison Crissier. Friends as well as colleagues, they jointly supervised the restaurant renovations that took place shortly before the handover.

Unique in this world, the kitchen is built entirely for and by the chefs of the restaurant. Staff members work cohesively in top working conditions: ideal temperatures, suction, smart circulation, energy recovery.

Today, guests can visit the kitchen before moving on to the dining area. Guests can even book the table inside the kitchen and witness a most astonishing performance while enjoying their meal.

Originally from Rochelle, Benoît Violier came from a family of winegrowers and oyster farmers. He belonged to the “Compagnon du Tour de France” and was named “Meilleur Ouvrier de France 2000”, best craftsman of France 2000. Recommended by Joël Robuchon, he started working for Frédy Girardet in 1996.

Deeply attached to the values of the House, he refined the principle of culinary virtuosity. His cuisine embraced simple flavours, obtained through careful handling of the best seasonal products. Lubéron green asparagus, line bar of the Corduan lighthouse, Swiss alpine calf with brown morels.

“On my plate, a base of fresh pea puree, covered with a sailing consommé of buttered peas, on which rested a julienne of raw sweet peas and truffles, sprinkled like seasoning. It’s like an olfactory walk in a garden.”

An experienced and passionate hunter, he brings Philippe Rochat’s Game menu to its pinnacle. It is an absolutely unique menu, hardly imaginable with the same freshness of the products anywhere other than in Switzerland.

The critics are unanimous; the miracle of Crissier lives on. Benoît Violier ran the restaurant for 4 years, together with his wife Brigitte and his head chef Franck Giovannini.

On the 1st of February 2016, after the sudden death of her husband, Brigitte Violier took over the restaurant’s management. “We built this together; I won’t give up on it.”

She gathered her 58 staff members and founded, for the first time in the history of the Maison, a tripartite management together with Franck Giovannini and Alessandro Egidi.

Brigitte Violier decided to give Franck Giovannini the freedom to write his own part in the book, just like his triple Michelin-starred predecessors. Chief Operating Officer of the restaurant since 2011, Alessandro Egidi works closely with Brigitte Violier on dining room management and guest experience supervision. This arrangement paid off as in October 2016, the Michelin Guide awarded the restaurant 3 stars and was rated 19/20 by the Gault-Millau.

The restaurant declared: “October 2016 has been a very emotionally and reward-dense month for the restaurant of the Hôtel de Ville de Crissier. It is the story of a family who will go to great lengths to ensure the prosperity of its excellence and offer their guests an exceptional culinary experience. It is the work of the incredible effort of the kitchen team, lead by Franck Giovannini and of the extraordinary service team. A daily routine, fuelled by passion and love for perfection.”

The Michelin Guide wrote: “Thanks to his extraordinary talent, Benoît Violier brought the House all the way to the absolute top of the haute cuisine. After his passing, the loyal kitchen brigade continues his work. Each plate, masterful as ever, cultivates the tradition and is served with the most exceptional service. The story goes on."

In August 2018, Brigitte Violier stepped down and Franck Giovannini took the wheel. Franck and Stéphanie Giovannini have since taken over management and continued to write the Maison’s history and heritage.

A passionate cook, the chef has a perfect command of the Maison’s cooking principles, written by Frédy Girardet, for whom he worked, as well as for Philippe Rochat and Benoît Violier, for almost 25 years.

The unique aestheticism gives his plates a subtle visual and gustatory balance. They are created from local seasonal produce with extreme precision, always respecting the principle of the three flavours. Giovannini’s style reveals a unique personality combined with an unparalleled technical mastery.

True to the Hôtel de Ville’s philosophy, the chef maintains the tradition and continues to offer some of the signature dishes of his predecessors all the while creating new ones. His cooking can be savoured à la carte or in two different set meals, in each of the 5 menus the guests can choose from.

Chef Franck Giovannini’s cuisine is most distinguished, having won the title of Best Chef 2018 Gault & Millau as well as Best Restaurant in the World according to the luxury travel magazine Elite Traveler. It is one of the most reputable restaurants worldwide. It has also been awarded 3 Michelin Guide stars.

At the Eckart Grand Art Culinaire awards ceremony, Eckart Witzigmann declared: “What characterizes the great school of Crissier is Hôtel de Ville founder Frédy Girardet’s Cuisine spontanée which has been cautiously perfected for it to become what it is today. It is Franck Giovannini’s attitude of respect that sets him apart from other chefs of his generation. It is the attitude that he has towards his products and people: his guests, his kitchen colleagues, his service team as well as all those who preceded him at the legendary Restaurant de l’Hôtel de Ville.” He received this award on May 19 2019 in Vienna. 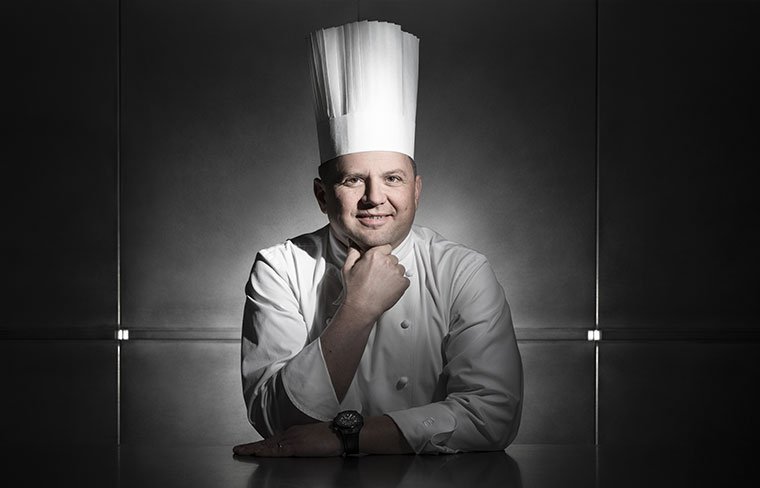 More than ever, “Maison Crissier” continues to forge its history...